or women working in one of the STEM2D fields—science, technology, engineering, math, manufacturing or design—being the only female in the classroom, lab or faculty meeting isn’t unusual.

Cat Oyler,Global Head of Strategy and Operations, Global External Innovation, Johnson & Johnson knows what it feels like to be in that minority.

“I had very few female science professors in college, and there were also few women in my science classes,” recalls Oyler, Global Head of Strategy and Operations, Global External Innovation, Johnson & Johnson. “It was hard to imagine a future in the field, given the scarcity of role models."

In fact, this actually caused her to switch her major from biology to English—a subject where she saw many successful female professors—in her sophomore year.

Ultimately, though, Oyler knew science was her passion, so she pivoted back to biology, and has since succeeded in various leadership positions throughout her career.

But Oyler hasn’t forgotten how she nearly veered off the STEM path. It's why, in 2016, she and several other women leaders at Johnson & Johnson created the Scholars Award for women pursuing advanced academic careers, to be given to six talented female assistant professors worldwide—each recipient representing one of the fields in the acronym STEM2D.

It's just the latest program to come out of the company's larger Women in Science, Technology, Engineering, Math, Manufacturing and Design (WiSTEM2D) initiative, which launched in 2015.

This week, Johnson & Johnson is honoring this year's Scholars Award winners, who will each receive $150,000 over three years to help fund research projects at their universities, along with mentoring from top Johnson & Johnson leaders and scientists.

The goal: support early-career scientists and ensure they have the resources and networks necessary to continue pursuing the important and life-changing studies they’ve already begun.

"Is My 'Check Engine' Light On?": How a Johnson & Johnson Employee's Health Scare Brought a Company Mission to Intercept Diseases to Life

“If we want more women sitting on boards, being senior scientific advisers or winning Nobel Prizes, we have to make sure they stay in the STEM2D disciplines,” Oyler says. “We can’t have incredibly bright women who could potentially change the world dropping out of the STEM2D pipeline."

So what makes Johnson & Johnson so well-suited to take on such a lofty challenge when it comes to diversity in the sciences? Scale as the largest healthcare company in the world, a companywide purpose to help find solutions for unmet healthcare needs for diverse populations around the world—and a legacy of supporting women scientists that dates back over 100 years.

What a Chemist From 1907 Has to Do With Today's Kindergartners
Johnson & Johnson hired its first female scientist, chemist Edith von K---, in 1905. She was one of only four staff scientists tasked with examining and testing raw materials throughout every step of the manufacturing process in an era when fewer than 3% of American women attended college.

Today, 45% of the company's more than 130,000 employees worldwide are women. But while the number of women in STEM2D has slowly risen over the years, the statistics still skew male—and part of the problem, experts say, harks back to how girls are exposed to the sciences early on in life. So since 1992, Johnson & Johnson has made it a point to invest in STEM education programs, including those that target young girls as early as kindergarten.

It’s joined up, for instance, with nonprofit organizations like FHI 360, the Smithsonian Science Education Center and Junior Achievement to find ways to make science programs in schools both educational and fun through resources like games, videos and more creative lesson plans—all with the ultimate hope of reaching 1 million young girls by 2020.

At the same time, the company has inked 11 partnerships with universities around the world—from MIT in Cambridge to the University of Limerick in Ireland—to help boost the percentage of women declaring STEM2D majors through scholarships, mentoring and research opportunities.

And the gambit's beginning to pay off: In 2017 alone, the WiSTEM2D program impacted over 10,000 girls between the ages of 5 and 18 through its Youth Pillar, as well as provided $1 million in funding to 177 undergraduate students through its University Pillar.

That's in addition to the $100,000 in annual funding the University Pillar provided to 10 universities in the U.S., Europe and Asia to create scholarships for undergraduate women in 2015. This year, Johnson & Johnson plans to forge alliances with three more universities across the globe.

“We have to get girls excited about studying STEM2D subjects from the beginning,” explains Georgia Papathomas

Somi Kim,Senior Director, Healthcare Solutions, Johnson & Johnson Design, Senior Director, Healthcare Solutions, Johnson & Johnson Design. A couple of years ago, she spoke on behalf of the company at a panel in Philadelphia, where she met a young UX design researcher with whom she's kept in touch. Today, that researcher is a contractor at Google.

“Staying connected to young people as their careers evolve provides me with a lot of rich insight on how to support and develop team members, especially women, to help close the leadership gap that persists in design across industries and disciplines,” Kim says. 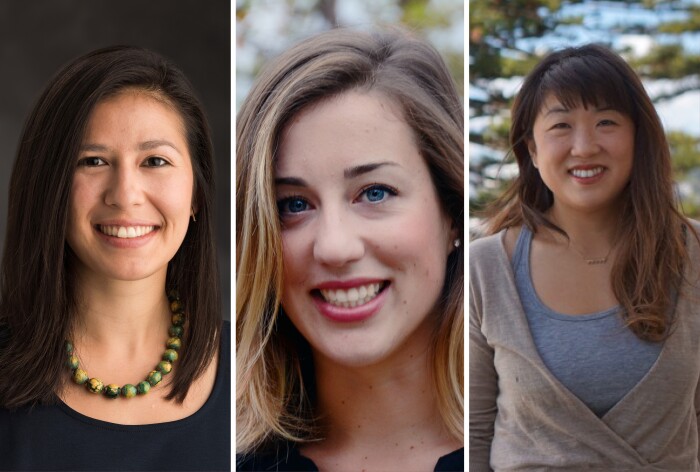 Before the Scholars Award was created, Oyler, Papathomas and their team met with faculty from some of the top schools in the world—Columbia University, the California Institute of Technology, the University of Oxford and the University of Tokyo—to figure out where female graduate students in the science fields, specifically, most needed support.

Their key finding: “Most women were dropping out around the assistant professor level,” Oyler says. "Universities were struggling with retention past that point." According to research, that's likely due to a lack of a solid support network.

Armed with this insight, they decided the Scholars Award should be given to women who are assistant professors, or who hold equivalent faculty positions, to help them push promising research forward.

Women like Lauren Stadler, an assistant professor of civil and environmental engineering at Rice University who's hoping to learn how to curb the growing problem of antibiotic resistance—specifically, how the genes that cause it are passed between bacteria in our water systems, and which bacteria, exactly, are to blame.

This will help us design treatment systems to reduce their spread in water and wastewater systems.

“My lab is brand-new, and this award will let me bring on more students to do experiments that I’ve been excited about, but haven’t had the manpower to tackle—like how to design and operate water treatment systems that will reduce the spread of these genes,” she says.

When you empower one woman, she can empower another and another. We’re ultimately hoping to create a healthier and more diverse workforce because that will not only benefit us as a company, but it can shape future science discoveries and therapies for years to come.

In addition to monetary support, winners will be able to consult with company scientists—a perk that winner Jessica Menold, an assistant professor of engineering design and mechanical engineering at Penn State University, can’t wait to get started on.

Currently, nearly half of the $140 billion spent each year on research and development for medical products to make it to market is wasted on items that ultimately fail to work, she says. So she's studying how tools, such as 3-D scanners and printers, can help design teams create prototypes that can help reduce the number of bum products made.

“I’m hoping that by working with a large, consumer-based company like Johnson & Johnson I’ll get more experience with the day-to-day design decisions that are made as products get launched to market, and ultimately create prototypes that are both effective and cost-efficient,” she says.

An award like this also creates more recognition for women at their universities and beyond, which can help shift the perception of who a scientist should be.

“For professional women and students alike, being able to visualize other women succeeding in STEM increases their confidence that they can also do this,” says winner Seemay Chou, an assistant professor of biochemistry and biophysics at the University of California San Francisco. “I remember the first time I met a younger female faculty member, and it hit me that maybe this was something I could do, too. And every additional woman in science I meet bolsters this confidence.”

Chou, like many of the winners, serves as a mentor to students in both her classroom and her lab, which looks at how tick-borne diseases like Lyme, which 300,000 people are newly diagnosed with in the U.S. each year, are transmitted. She's also studying why only certain ticks carry these disease-causing bacteria—a question scientists have yet to fully answer.

“The Scholars Award gives my new lab a boost in funding that will enable me to continue to support and mentor women in science in the Bay Area,” she says.

How Raising Up Women Can Raise Up Healthcare
In addition to continuing its WiSTEM2D initiatives in the U.S., Johnson & Johnson hopes to broaden its reach to women and girls all over the globe.

“Now that the Scholars program will be in its second year, we’re looking to expand even further into other countries so every continent is touched,” Papathomas says.

7 Women Who Are Helping to Change the World for Women

Her WiSTEM2D team is also working with leading academic institutions in Japan, Brazil and Ireland to increase the number of women enrolling in programs and graduating with STEM2D degrees by hosting roundtables with STEM leaders, and linking colleges to local high schools to pass down a passion for science, among other initiatives.

“It's like the rising tide that lifts all the boats,” Oyler says. “When you empower one woman, she can empower another and another. We’re ultimately hoping to create a healthier and more diverse workforce because that will not only benefit us as a company, but it can shape future science discoveries and therapies for years to come.” 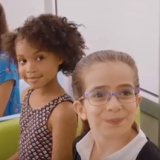 Wanted: The Women Leaders of Tomorrow
Learn how Johnson & Johnson is igniting the power of women to inspire the next generation of healthcare movers and shakers.
Watch this fun video
免费黄片